4 types of car seat belts what makes them different

Make Your Seat Belt Work for You: Customize It

4 types of car seat belts what makes them different

4 Types of Car Seat Belts – What Makes Them Different?

Seat belts are responsible for saving 15,000 lives in the U.S. each year. In fact, wearing a safety belt reduces a user’s risk of dying in a car accident by 45%. As a result of wearing a custom seat belt, the likelihood of suffering a serious injury is reduced by 50%. Similarly, people who do not wear a seat belt are 30 times more likely to be thrown from the vehicle during an accident.

Furthermore, as the law now mandates the regular use of safety belts, the number of car crash fatalities drops each year.

The Function of a Seat Belt and How They Save Lives

A seat belt is a safety device designed to prevent severe injuries from occurring to drivers and passengers in vehicles.

The typical modern seat belt has a strip of webbing that fastens around the individual. It is connected to a retractor. The retractor is designed with a spool that the webbing winds around. When the user pulls on the webbing, the spool then turns counter clockwise and feeds webbing off of it. Upon release, the webbing winds back up on the spool. This rewinding action is due to a spring that provides the rotation force to the webbing spool.

The retractor also has a mechanism designed to lock the belt into place if the car comes to a sudden stop, which causes the webbing to hold firmly against the wearer. Consequently, this prevents uncontrolled movement inside the vehicle during an accident. Seat belt safety is therefore provided when properly fitting devices are used every time the vehicle is in motion.

Benefits of a Custom Seat Belt

What are 2-Point Seat Belts?

A 2-point seat belt is also referred to as a lap belt. The belt goes directly across  the user’s lap to connect with the buckling mechanism, and has no shoulder harnesses.

Invented in the early 1900s, the 2-point seat belt was the first type of safety belt installed in passenger vehicles. Before 1964, safety belts were an optional, but not required feature in vehicles. Granted, this model was very helpful, but, after a few years, auto manufacturers started to put in shoulder harnesses for added safety.

Ordinarily, people who purchase antique vehicles want them refurbished to their original condition. For this reason, new owners do not usually add safety belts if they are not standard issue for that model, and the law does not require them to be installed. Seat belts, however, improve the safety of both the driver and passengers. One should also ensure that their antique vehicle can be driven without safety belts in place before doing so. Restrictions on how far they can be driven without these devices may apply. In addition, if the vehicle came with safety restraints, one should try to replace the restraints with exact replicas of the originals.

What are 3-Point Seat Belts? 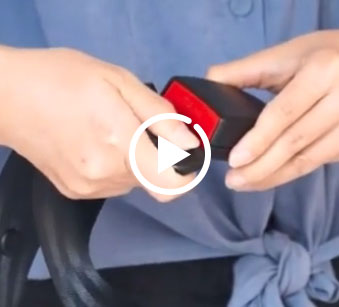 A 3-point seat belt has a sash that goes over the shoulder of the user, then crosses their lap.

First produced in 1959 by the car company, Volvo, the belts were initially considered luxury accessories; other car manufacturers, therefore, did not install them.

These seat belts distribute the force of an impact across the chest, pelvis, and shoulders, decreasing the risk of injury for users in an accident. The design prevents more injury than the lap belt alone. As a result, the 3-point belt is the type most commonly used. As the law now mandates that all motor vehicles have seat belts, the 3-point belt is the one predominantly installed by auto manufacturers.

What is a 4-Point Seat Belt?

One should never cut or alter car seats to install a seat belt. They are crash-tested and rated with the original manufacturer’s seat belt in place. When cut or altered, it may change the way the seat works in the event of a crash. Moreover, altering the seat or seat belt of the vehicle may also violate insurance conditions. 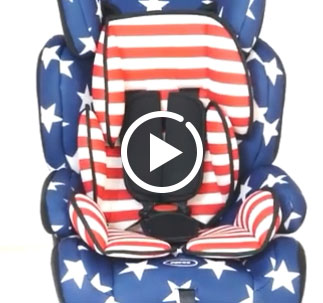 As a result of the use of child safety seats, more than 85% of children in automobile accidents are not harmed. Carefully reading of installation instructions allow one install these items properly. Local law enforcement agencies and hospitals are usually glad to instruct new users how to properly install them.

Warning Triangles and Other Safety Accessories 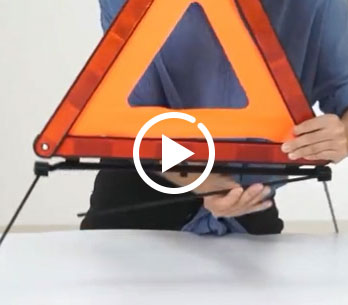 The warning triangle is a highly reflective triangle meant to signal when a car is broken down. It warns other motorists that a car is stationary.

How to Select the Best Seat Belt Supplier for Your Needs

Consider the following when are selecting which a seat belt supplier:

First, consider the cost of the belts. Shop with several different suppliers to determine which one has the best price for the best product. Make sure to compare quality and features against cost to avoid purchasing for a lesser device.

Second, a supplier should have at least one of these three major types of certifications: 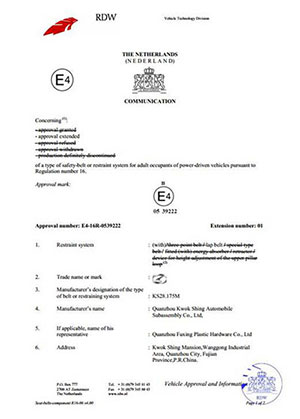 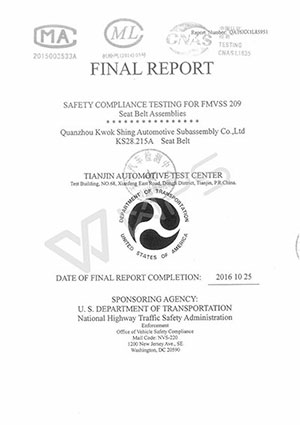 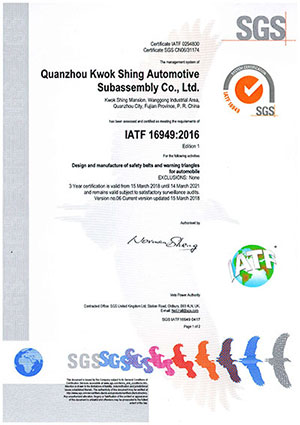 A supplier with all three certifications, however, is preferred.

Third, the quality of the safety devices used will determine their safety. Never buy any products that are not made from quality materials, or those without proof of seat belt safety testing.

Finally, shop with a supplier that can create customized safety belts for better protection. It should be long enough to fasten easily, and it should be comfortable enough to wear it every time a user drives. The customization should retain the safety of the belt and should not interfere with belt performance.

In summary, when one rides in a vehicle without fastening the safety belt, they risk injury or death.

The following tips and facts are a reminder to remember to buckle up: